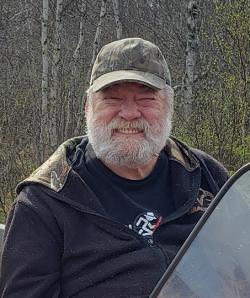 William "Billy" Stewart passed away on November 10th, 2022 on the Hopewell Hill Marsh.  He always said he wanted his last moments to be at home in his lazy boy chair or outdoors riding his four wheeler.  On Thursday his wish was granted as he passed away beside the creek in Hopewell Hill.

He was born in Moncton on July 15th, 1946 the son of the late Donald and Mary (Russell) Stewart.
Billy worked for the Gypsum Company and last worked in the woods with Lynn Lockhart.  Billy grew up in Hopewell Hill and was an avid outdoorsman.  He was known for his sharp hunting skills and was the best around when it came to sighting a rifle.  He always said after he finished with the gun" if you missed it was definitely not the gun, it was the one using it. "  He was known for his quick wit and he loved to get a rise out of people, especially his brother Stephen.  He had a great sense of humour and loved to tease.  You never knew what Billy was going to say, he sure was entertaining.   He made the best moonshine in the county!  When standing in front of the judge for sentencing, the judge asked "was it good stuff?" he answered " the best!"  Billy had a special place in his heart for his dogs.  He loved to tell the story about his last dog Trav who ate multiple pairs of Billy's false teeth and always had a  good laugh.  Billy was content at his home in Hopewell Hill and enjoyed travelling the trails on his four wheeler.  He made many trips over the marsh to the local convenience store for his supplies. He liked to keep up on all the news and had a lot of stories about the past. He spent many hours visiting the local camps of friends for a few drinks and many laughs. They always kept an eye on the house and were there to help in any way.
Billy lost his wife Marion at a young age.  He depended on his girls who were always there for him.  He was very proud of who they had become and even though he never told them to their faces, he was always praising them to whoever he was talking to. He enjoyed all the outings and adventures they shared over the years. He was also known for making the best homemade bread...he would always say to his girls " I swear you guys can smell it cooking cause you land here every time I'm taking it out of the oven!" The girls will miss having his daily phone calls..."Ya Kris"... "Hey TL" .  He called all the grandchildren turkeys and loved to see them come visit.  His family was very important to him.
He came off as gruff at times but he had a big heart and anyone that was close to him knew it.  He didn't want a fuss made over him when he was alive and doesn't want a fuss made over him now that he is gone.  He would say remember all the funny stories and how he would laugh and smile when he was up to no good.  "What we keep in memory is ours forever."  He is only a smile away.
He will be deeply missed by his daughters, Tammie Stewart of Hillsborough, Krista Stewart (Glenn Putt) of Riverside-Albert and Orenda "Rendy" Stewart of Moncton;  brothers, Stephen Stewart (Lynda Morgan) of PE and Jerry Stewart (Pat Shannon) of Madoc, ON; sister-in-law, Myrna Stewart of Riverside- Albert; his grandchildren, Kimberlee, Stacie and William; great-grandchildren, David, Destiny, Summer, Abigail and Chloe; step-great granddaughter, Audrey. He will also be deeply missed by several nieces, nephews, by his best friend, Brian Wood of Moncton;  his furbabby, Trav and by his many friends.
Besides his parents he was predeceased by his wife, Marion (Turner) Stewart and brother, Ian Stewart.
Honouring Billy's own wishes there will be no visitation or funeral service.  There will be a gathering to share memories, stories and a "little drink" at a later date at his home.
Donations to the family as a Living Memorial to help them out at this time would be greatly appreciated.
Arrangements are in the care fo the Albert County Funeral Home 4130 Route 114, Hopewell Cape, NB E4H-3K2 734-2780
www.albertcountyfh.com
THANK YOU!
The family of the late William "Billy" Stewart would like to take this opportunity to say THANK YOU! To the RCMP, Search & Rescue Team, Riverside-Albert Volunteer Fire Department for all their efforts, Special thanks to Eric And Stacie Lockhart who went above and beyond and all our neighbours and friends and everyone who helped in the search for our dad. To Roxanne Butland for coming to the house and staying all night and being there for us. To all those who brought food to the house, sent cards, online condolences, and had us in their thoughts and prayers over this difficult time. All the kindness shown and support given will never be forgotten. Words just do not seem to be enough but we are extremely grateful to all of you! We know that dad would not want us to be sad but to remember all the funny stories and have a laugh or smile when we think of him. He really is only a smile away.

Tammie, Krista, Rendy and families
>Click here to View Condolences
Service Location
No Funeral Service
Visitation
No Visitation
Requested Charity
Donations to a Living Memorial for the family would be appreciated.