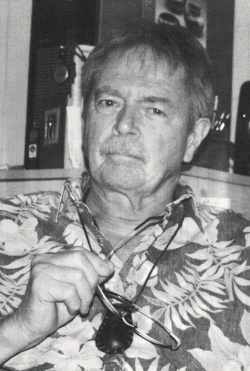 Brian Sydney Blakney, 72, of Scoudouc passed away unexpectedly on June 13, 2022 at his residence.
Brian was born in Moncton on February 7th, 1950 the son of the late Sydney and J. Arlene (Steeves) Blakney.
Brian was a very talented artist and took great pride in his pottery.  He was well known for his Lonesome Rose Pottery Studio and became a very important part of the community in Waterside sharing his talents and artwork with everyone who took an interest.  In later years he worked at a studio in Victoria, BC and instructed classes, this was very rewarding and teaching his students was one of his greatest joys and accomplishments in his life.
He was an avid bird watcher and even hatched and raised a gull from an egg his son brought home.  He loved being in nature and enjoying all the natural wonders of the world.  He had a passion for photography capturing all the essence of the wildlife and the scenery he had the privilege to be surrounded by.  He also had a great sense of humour.  He would want everyone to remember all the good times they shared and reminisce with funny stories and not take anything for granted.   " Life is just like potter's clay; it gets shaped by our own hands."
Brian had a close connection with his son and when Mitchell started his own family, Brian couldn't have been happier.  He cherished the times spent with them and was thrilled to spend time with his grandchildren.  He was an awesome grandad.
He will be deeply missed by his son, Mitchell Blakney (Shelby); his treasured grandson, Maverik and his precious step-granddaughters, Aleah and Alydia; sister, Rhonda Beers (Gary); brothers, Brent Blakney and Blaine Blakney all of Moncton.  He is also survived by the mother of his son, Barbara Little of Harvey Station and by several nieces and nephews.
The family would like to invite everyone to join them for a time of visitation and sharing memories to celebrate Brian's life at the Albert County Funeral Home on Thursday, June 23rd, 2022 from 4-7pm.
For those who wish donations to the SPCA in Brian's memory would be greatly appreciated by the family.
Arrangements are in the care of the Albert County Funeral Home, 4130 Route 114, Hopewell Cape, NB, E4H-3K2  734-2780
www.albertcountyfh.com
>Click here to View Condolences
Service Location
No Funeral Service
Visitation
Thursday, June 23rd, 2022
Visitation Time
4-7pm
Visitation Location
Albert County Funeral Home
Requested Charity
For those who wish donations to the SPCA would be appreciated by the family