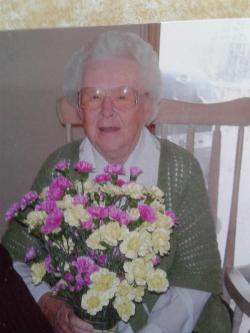 Elsie Ida Smith, 94, of the Grass Home in Riverview and formerly of Curryville, passed away peacefully on June 12, 2021 at the Moncton Hospital with her loving family by her side.  Elsie was born in Memel, Hopewell Hill, NB on August 8, 1926, the daughter of the late Stanley and Susie (White) Woodworth, and raised by her step-mother Gertrude Woodworth.  Elsie was raised on a farm along with her siblings Lester and Welda.  Her cousin Doris, currently living in Hopewell Hill, was her special childhood friend and they maintained that friendship throughout the years.  What beautiful memories they have shared with each other and with family and friends.

Elsie graduated from Riverside Consolidated School in 1943 along with 20 others.  Her first position as a school teacher was in Johnson’s Mills near Dorchester, which at 16 years old seemed very far from home.  However, she boarded with a beautiful family there that she kept in contact with either by visitation or correspondence until this past year.  A couple of her trips home were made by boat,  crossing the Petitcodiac River.  Eventually wanting to be closer to home Elsie accepted her second teaching position at  a small school in Curryville.  It was during this time that she met the love of her life, Warren.  They married in 1947 and built their home in the community.  Teaching in the classroom came to an end and teaching in their home began.

Together Warren and Elsie raised 5 children and were blessed with many grandchildren and great grandchildren.  Our beautiful mother loved her family, her friends, her community and God.  Many have been recipients of her special gift of knitting, taught to her by grandmother in 1938.  Up until this past year she was still teaching others to knit, some being students from local Riverview schools and some staff at the special care home.

Warren and Elsie owned blueberry fields in Curryville and much time was spent in the fields over the years, not just working and harvesting berries, but chatting with friends and family who would come to pick a few quarts of berries.  It was their "happy place".

Warren and Elsie were members of the Curryville United Church, and Elsie a member of the Frieda Gamble Missionary Society.

She will be deeply missed by her daughters, Susan McLaughlin (Jim) of Riverview, Karen Smith (Duncan) of Lower Coverdale; sons, Orville Smith of Curryville, Gary Smith of Lower Coverdale and George Smith (Brenda) of Hillsborough; her seven treasured grandchildren and twelve great grandchildren.  She will also be missed by several nieces, nephews, her cousin Doris and special home care workers/friends,  Louise and Cathy.

Besides her parents she was predeceased by her beloved husband, Warren in 2013; sister, Welda Woodworth; brother, Lester Woodworth (Shirley); brothers-in-law, Robert Smith (Glendeen) and Edward Smith and grandson, Travis Smith.

Elsie will be resting at the Albert County Funeral Home with public visitation on Wednesday evening from 6-8pm with Covid measures being followed.  A private family funeral service will be held on Thursday at 2 PM, by invitation only.  Interment will be held in the Curryville Cemetery and anyone wishing to attend the Committal Service at the Cemetery is welcome on Thursday afternoon,  June 17th at 3:30pm.

A Celebration of Elsie's life will be held at a later date when we can all get together from far and near and have a time for all to share memories and gather for a lunch in true Elsie fashion.

In Elsie’s memory, donations can be made to the Curryville Community Center, Curryville Cemetery or charity of donor’s choice.  All donations are appreciated.