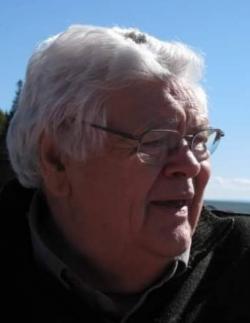 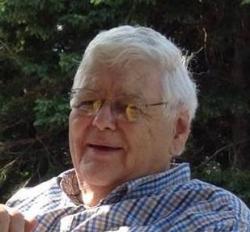 Sydney Everett Butland, 84, of Riverview passed away on January 10th, 2021 after a brief illness at the Moncton Hospital.  Sydney was born in Alma, NB on January 6th, 1937, the son of the late John and Myrtle (Ross) Butland.

Sydney attended high school at the Alma Superior School then went on to Teacher's College in Fredericton, where he graduated with his Teaching Degree.  He furthered his education at the Université de Moncton, taking night courses while teaching full-time.  His passion was teaching and he taught school in Alma for over 35 years as a teacher and then Principal.

Sydney was a man of great accomplishments.  He loved to laugh and not take himself too seriously, which helped him deal well with all his students.  He was a talented organist and shared his ability by playing at the Alma Baptist Church, Eastern Star meetings and the St. Stephen's United Church, when needed.  In 1984, he started the Harbourview Market & Coffee Shop in Alma with his wife and brother, where he put his cooking skills to work.  He enjoyed meeting many tourists and providing the spot for all the locals to meet in Albert County.  While his daughters were teens, their friends grew to affectionately call him "Papa Syd" and he loved hearing this term of endearment, which stuck with him the rest of his life. He was very community-minded and was honoured when he received the Queen’s Diamond Jubilee Medal for his outstanding Community Service.  Sydney was an active member and Past Patron of Winston Churchill Chapter #19, Order of The Eastern Star and played a significant role in keeping things organized, especially on the Catering Committee.  He enjoyed theatre, acting in a local community theatre troupe.  He went on to create the Winston Churchill Players, an Eastern Star dinner theatre family, where his true personality flourished as he wrote many musical comedies.  His entertaining abilities were second to none; he loved to laugh and have fun.  He could always be found telling stories and laughing with everyone he knew - he was an entertaining conversationalist.

Sydney had a great life and lived it to the fullest; the way he lived has given his family a true example of the meaning of life.  He loved his family so much and taught them how to enjoy the little things.  His grandchildren and great-grandson were the apple of his eye.  Sydney liked to watch all sports from his easy chair, especially curling, the Toronto Blue Jays and Toronto Maple Leafs. He was a true sports fan and enrolled his grandson, Ian, in curling at an early age and was thrilled to see William involved in many sports. He travelled to many curling, swimming and hockey events, always wanting to be involved in whatever his grandchildren were doing in their lives.  Kyleen shares his passion for cooking and often would call him for one of "Gramp’s favourite recipes" or for his input with one of her college assignments.  He was definitely one of a kind and his bubbly personality will live on forever.  He would want everyone to remember a story about him and smile as fond memories come to you, especially if it brought a good chuckle.

He will be deeply missed by his loving wife, Eleanor (Kyle) Butland; his daughters, Heather McKinley (Allan) of Riverview and Susan Steeves (Jeff) of Moncton; son, Paul Butland (Sarah) of Frasers Mountain, NS; his precious grandchildren, Kyleen (Chris), Ian and William; his treasured great-grandson, Jonah; brothers-in-law, Dean Kyle of BC and Paul Kyle (Kathleen) of Edgett's Landing.  He will also be missed by his special cousin, Isabel Hicks (Dale) of Riverview who was like a sister to him; his nieces and nephews, Timothy Butland (Lynn), Virginia Taumoli (Simpson), Danny Kyle (Diane), MacKenzie Kyle (Laura), Beth Bergen (Reynold), and Vanessa Kyle; his American extended family, The Harringtons, whose visits on either side of the border brought him such happiness and laughter; his wonderful cousins who share so many of his childhood memories, great-nieces, great-nephews and by many good friends.

Besides his parents, he was predeceased by his brother, Kenneth and sisters-in-law,Lorna Butland and Audrey Kyle; nephews, Michael Butland and Brent Kyle.

Due to COVID, once able, there will be a Celebration of Life gathering when we can celebrate in "true Sydney fashion".  Interment will be in the Mountain View Cemetery, Lower Cape, NB at a later date.

For those who wish, donations to the Extra Mural Program or to the Lottie L. Kyle Scholarship Fund (Order of the Eastern Star) would be greatly appreciated.

The family would like to say a special thank you to all the Extra Mural Nurses, especially "our" Heather Kennedy and to all the staff of 4200 at the Moncton Hospital, especially Emily and Emilie (two "girls" who looked after him so well).  The care and support given, and kindness shown to his family, will never be forgotten; you all have gone above and beyond the call of duty.