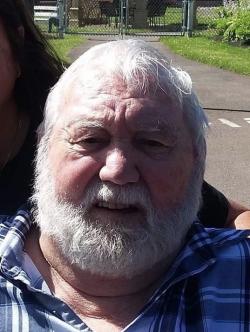 Carman "Doug" White, 82, of Forest Dale Home and formerly of Harvey, Albert County passed away peacefully on February 10th, 2020 at the Moncton Hospital.
Doug was born in Harvey on October 14, 1937 the son of the late Glenn and Flora (Hennigar) White.  He served in the Royal Canadian Airforce as an aircraft technician for 22 years, with postings of Winnipeg, Manitoba, Germany and Trenton, Ontario.  He retired to where he always wanted to be, home in New Brunswick.  Doug loved living in the country and his heart was always in Harvey.  He loved dogs, enjoyed the outdoors, being in the woods, and an avid collector.   He is now at peace with God and nature.

He will be missed by his children, Deborah Penny, (Glen), of Edmonton, AB, Darlene Horne (Gordon) of Trenton, ON and Glenn White (Sule) of Turkey; 8 grandchildren, Stephen, Michael, Brian, and Kevin Penny;   Tesha Sampson (Ron) and Glenn Gordon Horne (Cristin)  Aaron and Jonathan White (Amanda);  6 great-grandchildren and his sister Freda Shaffer (Hillyard) of Halifax, NS.
Besides his parents he was predeceased by his wife, Noreen "Reenie", Grandson Stephen Penny, brother Gerald White and infant brother Rourke White.
Honouring Doug's own wishes there will be no visitation or funeral service.  A private Family Graveside Service will be held at a later date in Bayview Cemetery, Harvey, NB.
For those who wish donations to the Forest Dale Home or Bayview Cemetery would be greatly appreciated.
Arrangements are in the care of the Albert County Funeral Home, 4130 Route 114, Hopewell Cape, NB E4H-3K2 734-2780
www.albertcountyfh.com
Click here to View Condolences
Service Location
No funeral service
Visitation
No visitation
Burial Location
Bayview Cemetery, Harvey, Albert County, NB
Requested Charity
Forest Dale Home or Bayview Cemetery would be greatly appreciated.