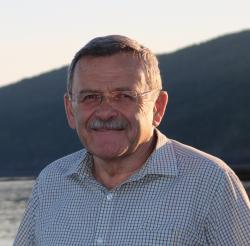 William "Bill" Charles West, 71, of Lower Coverdale passed away peacefully at home on February 7, 2020 surrounded by his loving family.  Born in Riverside on December 2, 1948, he was the son of the late James "Jim" and Norma (Milburn) West.

Bill was a well-known entrepreneur and self-employed businessman in the amusement and lottery industries in Canada and Peru.  Family was his priority in life, and he treasured times shared together at the cottage at Dennis Beach.  In public he was private, but in conversation warm, engaging and compelling, building strong lifelong relationships with family and friends in his community and industry.

He saw the world differently, finding solutions where others did not, and worked tirelessly toward their accomplishment.  With enough time and thought he could move anything, including the cottage – single-handedly – after the front yard fell down the bank in a maritime storm.  A restlessness coupled with a love of discovery made him not unlike the shorebirds who also feed and rest on Fundy Bay between their recurring journeys to and from South America.

In his last days Bill felt blessed to have his family care for him and grateful to spend it at home as he made a last journey to be with his Heavenly Father.  He has left us beautiful memories and we will see him again.  Borrowing from a favourite hymn:

A Celebration of his Life will be held at the Albert County Funeral Home on Thursday, February 20th, 2020 at 2:00 pm with Rev. Don MacDougall officiating.  There will be no prior visitation.

Donations to the Friends of the Moncton Hospital or charity of the donor's choice would be greatly appreciated by the family.