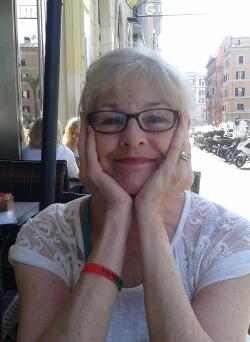 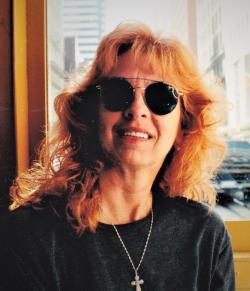 Diana Lynn Paterson, 70, of Shepody passed away on January 30th, 2020 peacefully at her home with her loving husband by her side.
Diana Lynn Ross Paterson. Born..Highland Park Michigan may 22nd 1949. Daughter of Hilda and Leon(AL) Ross. In the next bed to Hilda, Diana's mother was Clayton Moores' wife. Clayton Moore was the famous tv star The Lone Ranger. Later made into a movie with Johnny Depth. Growing up Diana had an older sister Louise. Also a younger sister Kim and a youngest brother Leon.  Over the years there were many jokes about Diana being the other Diana Ross of Detroit.The other Diana Ross from Detroit of course is from the 60's Black group the Supremes.In the 1960's Diana met Diana Ross of the Supreme's at the Michigan State fair. Diana attended Trenton High school and Graduated from there.  During the 1970's Diana met and befriended a rock star from Detroit...Bob Seager. She attended many parties with Bob and the Silver bullet band. She embroidered the bands jackets for them which was a cool thing in those days.  Diana worked at many jobs in the Detroit area in her life. Trenton Chrysler engine plant. ADP payroll systems/Mirror lite transportation mirrors.She retired from Ace Packaging/International paper company before moving to Canada with her Husband Art. Diana met her husband Art and they dated for 3 months and got married on June 29th/1990 in Michigan.They have been happily married for 30 years.Diana's dream was to buy a house in the Fundy area and open a store. After buying their home in Shepody and extensive renovations her dream came true. Catch the wind gifts on rt.114 opened and stayed open for 10 years. Then Art & Diana decided to change over to an AirBNB Bed n Breakfast which is still open during the summer months.  May 19th-Oct.4th.  Diana had a favourite trip her and Art would take several times a year. From Detroit to Centalia,Illinois to visit her favourite aunt Evelyn and Uncle Sonny.  Art and her went to Lemmington,Ontario several times as well as several trips to Toronto. Of course every year they would come to New Brunswick on vacation. Art grew up on West Lane in Moncton so is quite familiar with the area.  One of the other favourite things Diana Loved was to go every Sept to the Renaissance Festival 50 miles north of Detroit out in the woods. There was a medieval town and everyone was dressed as Knights and Kings and Queens.  This is a list of concerts and groups that Diana attended before meeting Art and while they were married.  The Bee Gees,Bob Seager,Bob Dylan,The Moody Blues,Grand Funk Railroad,Crosby Stills Nash &Young,The Beach boys,Madonna,Rod Stewart,The Temptations,KD Lang, Donovan,ZZ top,Black Crows, Arlo Guthrie, Paul McCartney and Wings, Ringo's allstar band,The Rollingstones,Ricky Nelson,Mitch Ryder and the Detroit Wheels,David Wilcox,The Turtles,Lou Christie,Leslie Gore,Little Anthony,Anne Murray,and Jesus Christ Superstar original cast, Davy Jones from the Monkees,and Peter Noone and Herman's Hermits.
Diana and Art also travelled to St.Louis,Mi. San Fransico, and Rome ,Italy.  Diana started a birthday club with her new friends when she moved to Shepody. Each month someone had a birthday so the ladies would treat the person and take them to the restaurant of their choice. This still goes on today.
She was a Loving wife and Best friend to Art (Brian) her husband of 30 years. Her Death is preceded by her daughter Tammy Lynn, Her sister Kim, Her father Leon(AL), Her aunt Evelyn and Uncle Sonny and Uncle Tom.
She easily made friends; had a great sense of humour and Loved all animals. She Was President of the Forest Dale ladies Axillary for 1 year as well as previously being a volunteer at the old home.  She worked for the Irving in Riverview for 2 years and at RBC call center before retiring here. When the terrible earth quake hit Haiti; Diana organized St.Mary's church in Hillsborough and several other churches to make pillow case dresses for the small girls left with nothing. With the help of many many people the RCMP and the Wesleyan church had delivered over 3,100 pillow case dresses to Haiti.
You have been called to a place where we can't understand yet. A wonderful place where there is no hate or tears but only happiness.God Bless...We miss you! Until we meet again.
Honouring Diana's own wishes there will be no visitation.  A Celebration of her Life will be held at the St. Mary's Anglican Church on Tuesday, February 4th, 2020 at 2:00pm
with Rev. Rob Salloum officiating followed by a time of sharing memories and refreshments at the Hillsborough Legion.  Interment will be in the St.Mary's Anglican Cemetery, Hillsborough, NB at a later date.
Donations to the St. Mary's Anglican Church or any animal rescue would be greatly appreciated.
Arrangements are in the care of the Albert County Funeral Home, 4130 Route 114, Hopewell Cape, NB E4H-3K2  734-2780
www.albertcountyfh.com
Click here to View Condolences
Service Date
Tuesday, February 4, 2020
Service Time
2:00pm
Service Location
St. Mary's Anglican Church, Hillsborough
Visitation
No visitation
Burial Location
St. Mary's Anglican Cemetery, Hillsborough
Requested Charity
St. Mary's Anglican Church or any animal rescue would be appreciated.