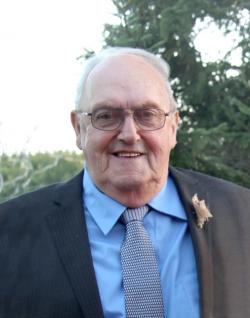 Reg was a well respected and loyal school bus driver for 29 years. He was always cautious for the safety of the students. Reg was also a truck driver for most of his life. He owned and operated his own trucks, hauling gravel to the concrete plants in Moncton, and also to many people in the Albert County area. He was always very proud of his perfect driving record throughout his career.

He enjoyed being outdoors in the garden, watching birds, and touring around Waterside on his four wheeler. Reg was happiest when working at the woodpile splitting wood. He liked working in his garage, and the visitors that stopped in to socialize. Reg was a Montreal Canadiens fan and loved to watch them play; however, he was an even bigger fan at the Hillsborough Arena, cheering on his grandchildren. He also enjoyed going to the family picnics where he would be the first to arrive and last to leave. He never missed an opportunity to tease or tell a funny story. Reg loved to talk.

The most important thing to him was his family. He was a dedicated husband, father, grandfather, and great grandfather. Together, Reg and Dorothy raised three boys and it is evident that Reg has made an impact on their lives. He was involved in everything they did and supported them always. He did the same for his grandchildren and great grandchildren, they were his pride and joy. He was very proud of his family's accomplishments. He was grateful for the times spent together and memories made.

He will be resting at the Albert County Funeral Home with visitation on Tuesday, December 3rd, 2019 from 6-9pm. The funeral service will be held at the Albert County Funeral Home on Wednesday, December 4th, 2019 at 2:00pm with Rev. Peggy Reid officiating. Following the service the family invites you to join them for further sharing of memories and for refreshments at the funeral home. Interment will be held at the Waterside Cemetery, Waterside, NB.

Donations to the charity of the donor's choice would be greatly appreciated by the family.

Reg’s family would also like to thank his exceptional caregivers, our angels; Susan and Beverly. Their care and compassion given will never be forgotten.