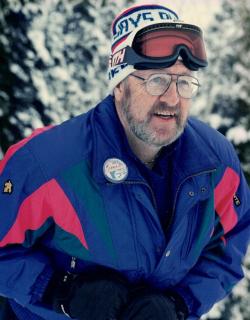 John Douglas Shortt of Alma passed away peacefully in his sleep on November 26th, 2019 at the Moncton Hospital after a brief battle with heart issues.

John was retired. He was an avid Toronto Blue Jays fan and always cheered for the Toronto Maple Leafs.  He enjoyed travelling and was privileged to have been able to travel all over the world.  He got to ski in the mountains and loved nature and being outdoors.  When he settled in Alma, he felt very fortunate to live near Fundy National Park and Cape Enrage.  His love of lighthouses and the bay was evident and he thoroughly appreciated spending his last days in such a beautiful place.

He will be deeply missed by his spouse, Kirstin Shortt of Alma and by his two nieces and nephew all of Ontario.  He was the last surviving member of his immediate family.
Honouring his own wishes there will be no visitation or funeral service.  Interment will be held at a later date in Alma.
For those who wish donations to Tele-Drive Albert County would be greatly appreciated.
Arrangements are in the care of the Albert County Funeral Home, 4130 Route 114, Hopewell Cape, NB, E4H-3K2 734-2780
www.albertcountyfh.com
Click here to View Condolences
Service Location
No funeral
Visitation
No visitation
Burial Location
Alma, NB
Requested Charity
Donations to Tele-Drive Albert County would be appreciated