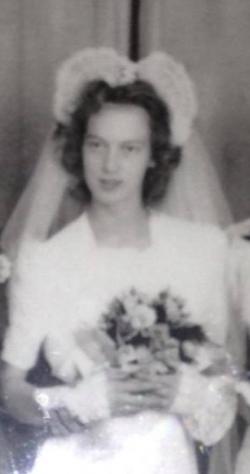 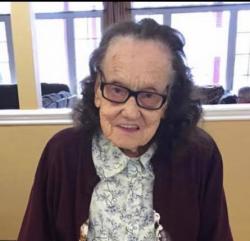 June Elsie Morrisey, 91, of Fundy Royal Manor, Hillsborough, formerly of Caledonia Mtn Rd, passed away on August 17th, 2019, with her only granddaughter by her side.

June was raised, & eventually built her own home with her husband of 66 years, Herman, on Caledonia Mountain.  It was the center of her universe & she was enormously proud to call Caledonia home.

June measured her own worth by how well those she loved were being cared for.  She adored caring for others, particularly children,  & gave thanklessly to those she loved.  She raised their only child, Marshall, with an audacious imbalance of affection and discipline.  He was perfect, & she spent her life telling everyone so.  Later, she would pride herself in helping to raise her only grandchildren, Rikki & Wally.  Her home was their home, & she embraced them completely.   Children were her fortunes, & surrounding herself with them filled her soul.

June was a beautiful quilter, creating many of her own designs, seamstress, cook, & painter.  She particularly enjoyed carpentry, & designed & built many of the buildings on her property, including additions to their expanding home.  She  received many local awards & accolades for her creativity.  She was very proud of her accomplishments, but always preferred accepting praise quietly, while avoiding attention.

Although June only worked outside her home for brief periods, she spoke fondly of those jobs.  One position included a special care home in Riverside-Albert, & another, a cook & caregiver at Broadleaf Farms in Hopewell Hill.

June was undyingly fond of her husband & son, but lost both of them too soon.  Marshall passed away at 35, & although she didn't think she could survive a day past Herman leaving her, sheer will moved her forward, and his death at the age of 88 forced her out of her treasured home as she was unable to care for herself anymore.  Reluctantly, her new home became Fundy Royal until her death.  Many thanks are in order to the beautiful employees of FRM who cared for, & loved her in the same way she loved, until the moment of her passing.

She will be profoundly missed by her grandchildren, Rikki Keirstead (Jeff) & Wally Morrisey (Tammie); her daughter in law, Jean Morrisey, and her cherished great grandchildren, Mackenzie, Wyatt, Grayson, & Marshall.  She will also be missed by many nieces & nephews, as well as by her dear Fundy Royal family & friends.

June wished for no visitation or funeral, but that she be laid to rest next to her husband, Herman. A future private graveside burial for her immediate family will be at Hopewell Hill Cemetery.