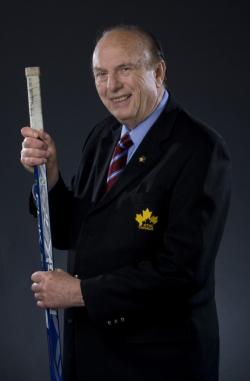 Peacefully after a brief illness at Sunnybrook Hospital on June 26, 2019.

Honoured and respected contributor to Canadian Youth Hockey for over 50 years.

John was elected to the Greater Toronto Hockey League Board of Directors (GTHL and formerly the MTHL) in 1975 and served as president from 1980-2015.   He participated on countless local, national and international hockey boards, committees and volunteer groups and coached many teams throughout the years.

Predeceased by his father Loris (Windsor, ON) and mother Frances (Hopewell Hill, N.B.) and will be sadly missed by his extended family from his beloved New Brunswick, by his G.T.H.L. family and by so many in the hockey community.

John’s legacy is truly an extensive one, however, placing the best interest of our youth above all is his most important one.

A visitation will be held at the Morley Bedford Funeral Home, 159 Eglinton Ave. West (2 lights west of Yonge St.), on Thursday, July 4th from 2-4 (remembrances at 3 p.m.) and 6-8. (remembrances at 7 p.m.) Subway is Eglinton station and parking will be available at the North Toronto Arena (174 Orchard View Blvd.) and the North Toronto Community Centre (200 Eglinton Ave W) Private service and interment, Hopewell Hill, New Brunswick.

It would have been greatly appreciated by John that in lieu of flowers donations be made to the G.T.H.L. Legacy Fund (https://torontofoundation.ca/gthl-legacy-fund) to assist youth to play the game he adored or to the Sunnybrook Foundation att: Palliative Care (sunnybrook.ca/foundation) whose staff provided John such wonderful care these past few weeks.